Empty
As electric planes pass another milestone, Future Planet asks how long will it be before they are ready for everyday aviation? And just how far can they go?
At a large airfield surrounded by farmland in central Washington State, an electric aeroplane recently made history. It is the biggest commercial plane ever to take off and fly powered by electricity alone. For 30 minutes on 28 May, it soared above Grant County International Airport as crowds of onlookers clapped and cheered.

The biggest electric plane ever, huh? Well, it was a modified Cessna Caravan 208B – which can take a maximum of nine passengers. And the test aircraft only had a seat installed for the pilot.

It’s a far cry from the 200-300-seater jet that takes you on weekend city breaks or work trips, never mind the huge double-decker planes that cross continents. But the “eCaravan” test flight was a success. The two companies behind it, AeroTEC and magniX, which supplied the electric motor, are chuffed with the results. Roei Ganzarski, chief executive of magniX, pointed out in a statement that the price of flying the Cessna clocked in at a mere $6 (£4.80). Had they used conventional engine fuel, the 30-minute flight would have cost $300-400 (£240-320).

It builds on previous experiments with smaller aircraft also fitted with an electric motor built by magniX. And is raises the question: when will you and I be able to fly on a larger passenger plane powered by electricity rather than fossil fuels?

The first thing to note is that long-haul flights by large aircraft are not going to become fully electric any time soon. Certainly not within the next 50 years – and the jury’s out as to whether that will even happen this century. The reason is energy density.

Energy density is usually defined in terms the number of watt-hours (Wh) you get per kilogram (kg). A current lithium-ion battery’s energy density might reach 250 Wh per kg, while the energy density of jet fuel, or kerosene, is roughly 12,000 Wh per kg. 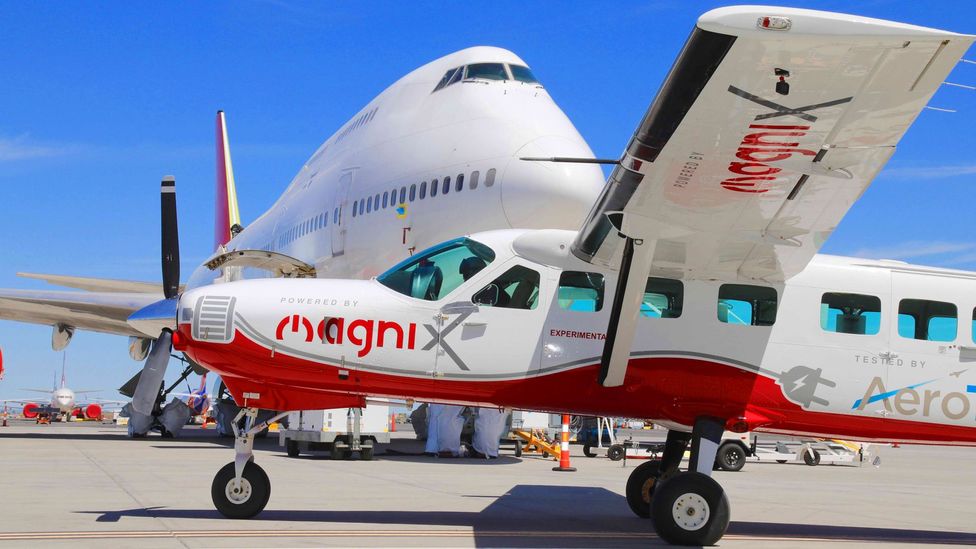 The eCaravan could be adapted to seat a grand total of nine passengers, but on its test flight it had just one seat for the pilot (Credit: MagniX)

Put like that, it might seem like electric planes stand little hope of catching up. However, the difference isn’t quite as stark as it seems because electrical propulsion systems can be designed to be more efficient, meaning that they can cover more miles on less energy. But, at present, this still leaves fossil fuel systems about 14 times more energy-rich than battery-powered alternatives. Batteries, not being fluids that merrily slosh around, are also awkward in terms of their shape and bulk. “Right now the fuel nicely fits into the wing,” says Susan Liscouët-Hanke, an aerospace engineer at Concordia University in Montreal.

To keep its current range, the plane would need batteries weighing 30 times more than its current fuel intake, meaning it would never get off the ground – Duncan Walker

Plus, a further hitch is that the weight of a battery stays the same even when it’s dead. As a traditional aircraft flies, kerosene gets used up, making the aircraft lighter. That in turn reduces the amount of fuel it needs to stay in the air.

Among those who have calculated what this means for actually getting electric planes into the air is Duncan Walker at Loughborough University. He worked out that the world’s largest passenger plane, the Airbus A380, could only fly 1,000km with batteries versus its standard range of 15,000km. “To keep its current range, the plane would need batteries weighing 30 times more than its current fuel intake, meaning it would never get off the ground,” he writes.

These limiting factors mean that most industry experts think there are specific types of plane that will be electrified first. That mainly means they will be on the small side – but not necessarily tiny.

Engineers are currently trying to build a 180-seat fully electric jet that can fly for around 500km. The budget airline EasyJet has partnered with the aviation start-up Wright Electric to design and develop such a prototype plane that, if successful, could enter commercial service as early as 2030. Its travel routes would be limited – Paris to London for instance, not much further – but narrow-body aircraft that fly short-haul routes of 1,500km or less make up around a third of aviation emissions, according to management consultants Roland Berger. By gradually introducing electric planes that could replace conventional aircraft on these short-hop trips, the environmental impact of flying could be significantly improved.

It couldn’t come too soon because, as Roland Berger also notes, aviation is the only major industry in the EU in which CO2 emissions are increasing significantly. While the industry accounts for just 3% of global CO2 emissions today, by 2050 commercial aircraft could be churning out up to 24% of worldwide emissions due to predicted growth in the sector.

Flying fully electric 180-seater aircraft commercially by 2030 is “very ambitious”, says Robert Thomson, a partner at Roland Berger. The more sober view is that by 2030 we will more likely see hybrid electric aircraft being rolled out. In these planes, propulsion is provided by batteries and electric motors alongside traditional combustion systems. “A 50-seater aircraft would become viable as a hybrid, maybe 2030, late 2020s – I think that’s the sort of timescale which is plausible,” says Thomson.

He adds that his firm has counted more than 200 electrically powered aircraft in development and the number of these projects increased by 30% between 2018 and 2019. Many of these aircraft are hybrid models. They come in all sorts of “flavours”, says Thomson, wherein electricity might provide as little as 10-20% of the plane’s propulsion. Still, in principle, these designs might be easier to develop using existing aircraft bodies. 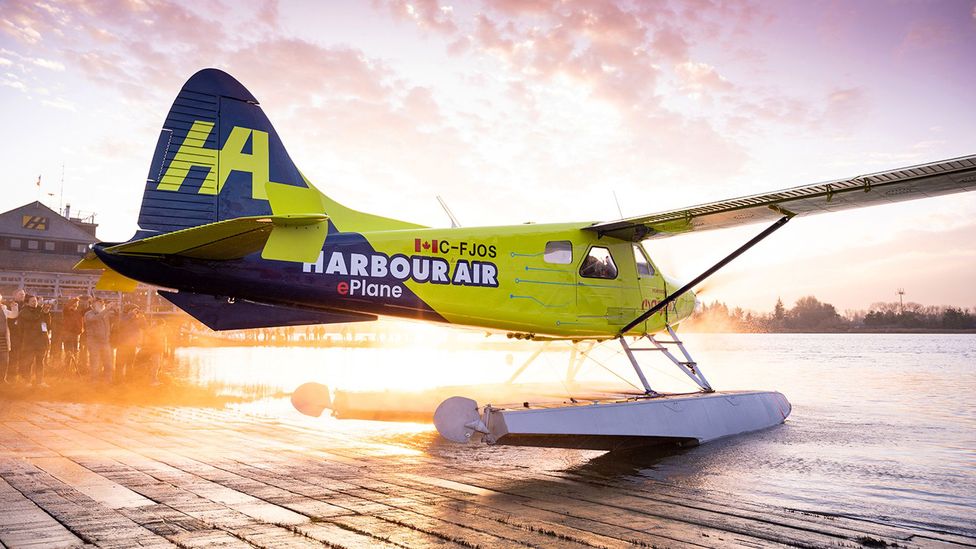 One of the most closely-watched hybrid aircraft experiments of recent years was the E-Fan X, a joint project between Airbus, Siemens and Rolls-Royce. The concept for the plane featured a 100-seat BAE 146 aircraft that was to be modified so that one of its four engines would be powered by a 2 megawatt motor – that’s enough juice to power roughly 2,000 homes. The plan was to perform a test flight with the aircraft this year but the project was suddenly canned in April.

Riona Armesmith, chief project engineer for hybrid electric propulsion at Rolls-Royce, says the technology developed for the E-Fan X has not been shelved entirely. “I think we just took a step back and looked at whether we really needed to fly these systems,” she says. “I think we felt that we learnt enough.”

There’s no current plan to fly a different prototype aircraft using technology from the E-Fan X scheme, admits Armesmith, but many lessons were learned nonetheless. Not least, she says, how components such as electrical generators, cables and switch systems need to be redesigned or built entirely from scratch in order to be reliable and safe enough to fly. It speaks to the fact that hardly anyone has adapted electrical systems to fly planes of this size before.

Electrical components require additional insulation to ensure they wouldn’t catch fire, for example, Armesmith says. And at high altitudes, high voltages take a greater toll on that insulation so it needs to be very robust to be flight-worthy. This meant she and her team had to design brand new cables and switchboards. “You kind of go, ‘Ah, actually, this is going to be a lot more challenging than we thought’,” she says.

Rolls-Royce still has other experimental electric aircraft in development, including the fully electric ACCEL plane, which is due to take flight this year, with the aim of setting a record as the fastest electric aircraft. Although a tiny single-seater, it is designed to reach speeds of nearly 500kmph and cover a range of more than 320km.

Like many in the industry, Armesmith says that the biggest developments may come when aircraft bodies themselves are redesigned to distribute more engines than usual across a plane. Theoretical studies have suggested that using more, smaller engines could reduce drag and can improve overall efficiency – making such designs potentially better options for electric aircraft. This is one of the principles of the Wright Electric work being coordinated with EasyJet. 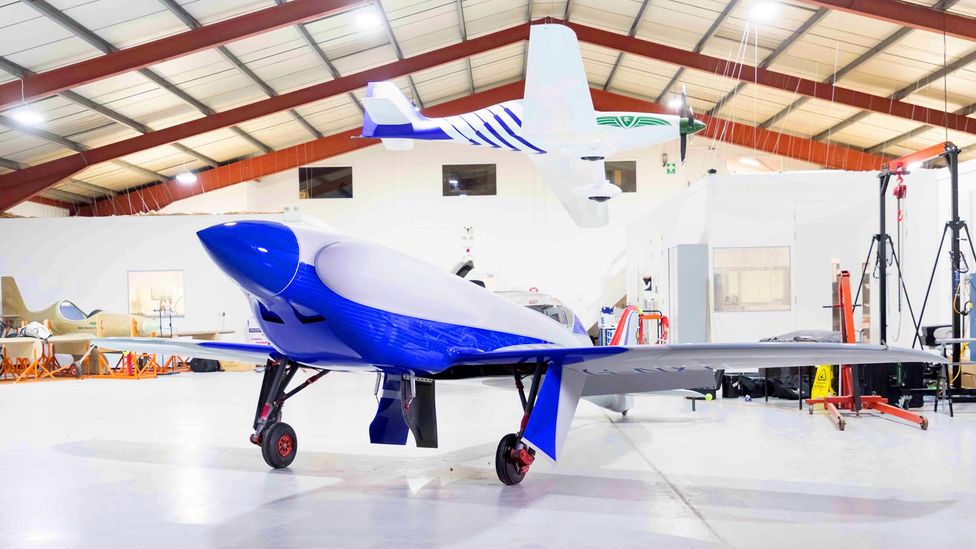 Rolls-Royce's ACCEL plane is due to take flight this year, and aims to be the fastest electric aircraft yet (Credit: Rolls-Royce)

The vast range of projects and experiments in electric aircraft remains encouraging, says Liscouët-Hanke. It means there are more chances for one of these aircraft to succeed. But it’s important not to get sucked into all the hype, adds Richard Aboulafia, vice president of analysis at the aerospace market research firm Teal Group.

While the technological limitations facing larger aircraft are undoubtedly significant, he praises the recent eCaravan experiment. For small planes that carry a handful of passengers or some cargo, there is a small market of about 100 vehicles per year. Electric aircraft of this kind don’t require big shifts in battery technology to work and flights can be trialled over less built-up areas, which ultimately is safer. “That is the ideal test market,” he says.

This won’t excite people who dream of going on holiday in an electric jet (or those living near to busy airports hoping for quieter skies). But it might represent some crucial baby steps on the way to that point.

In the meantime, two other technologies for lowering the emissions of aircraft being considered are biofuels and hydrogen propulsion systems. Each has problems of its own. Biofuels made from organic matter could be used by existing planes and may be greener than kerosene, but as yet the market for it is small and many biofuels come with their own environmental drawbacks.

And hydrogen, while potentially clean if obtained from a renewable source, suffers from some of the same problems as electric batteries. “You need something like three times the volume to store hydrogen for an aircraft than you do for kerosene,” says Thomson. “In today’s architecture for an aircraft, there’s nowhere to put it.”

In other words, all three of these hopeful technologies – batteries, biofuels and hydrogen – require some major breakthroughs before they can revolutionise aviation. And the Covid-19 pandemic, which has hit the airline industry very hard, may hold developments back even further.

Interest in greener travel is building, however. With political support for electrification, the momentum behind experimental projects by Airbus, EasyJet, Rolls-Royce and many others could build, says Liscouët-Hanke.

“If the […] policies are there to support it, I think we will see that,” she says.

For any plane, it does take an awful lot of effort to get off the ground.uture, Culture, Worklife, and Travel, delivered to your inbox every Friday.

What Happened To Giant Flying Boats?

The Most Powerful Armies in the World

10 Most Popular Commercial Airplanes That Most Airlines Buy

B-2 : World Most Dangerous Bomber

Build Your Own Drone

10 Most Popular Commercial Airplanes That Most Airlines Buy

How Atomic and Hydrogen Bombs Work In 10 Minutes

Why did the Vietnam War start?

The 25 Greatest Spaceships of Science Fiction

WW1: Was it really the first world war?

10 Insane Secret Weapons In The World