The Cold War was a lengthy struggle between the United States and the Soviet Union that began in the aftermath of the surrender of Hitler’s Germany. In 1941, Nazi aggression against the USSR turned the Soviet regime into an ally of the Western democracies. But in the post-war world, increasingly divergent viewpoints created rifts between those who had once been allies.

The United States and the USSR gradually built up their own zones of influence, dividing the world into two opposing camps. The Cold War was therefore not exclusively a struggle between the US and the USSR but a global conflict that affected many countries, particularly the continent of Europe. Indeed, Europe, divided into two blocs, became one of the main theatres of the war. In Western Europe, the European integration process began with the support of the United States, while the countries of Eastern Europe became satellites of the USSR.

From 1947 onwards, the two adversaries, employing all the resources at their disposal for intimidation and subversion, clashed in a lengthy strategic and ideological conflict punctuated by crises of varying intensity. Although the two Great Powers never fought directly, they pushed the world to the brink of nuclear war on several occasions. Nuclear deterrence was the only effective means of preventing a military confrontation. Ironically, this ‘balance of terror’ nevertheless served as a stimulus for the arms race. Periods of tension alternated between moments of détente or improved relations between the two camps. Political expert Raymond Aron perfectly defined the Cold War system with a phrase that hits the nail on the head: ‘impossible peace, improbable war’. The Cold War finally came to an end in 1989 with the fall of the Berlin Wall and the collapse of the Communist regimes in Eastern Europe.

After World War II, the United States and its allies, and the Soviet Union and its satellite states began a decades-long struggle for supremacy known as the Cold War. Soldiers of the Soviet Union and the United States did not do battle directly during the Cold War. But the two superpowers continually antagonized each other through political maneuvering, military coalitions, espionage, propaganda, arms buildups, economic aid, and proxy wars between other nations.

From Allies to Adversaries

The Soviet Union and the United States had fought as allies against Nazi Germany during World War II. But the alliance began to crumble as soon as the war in Europe ended in May 1945. Tensions were apparent in July during the Potsdam Conference, where the victorious Allies negotiated the joint occupation of Germany.

The Soviet Union was determined to have a buffer zone between its borders and Western Europe. It set up pro-communist regimes in Poland, Hungary, Bulgaria, Czechoslovakia, Romania, Albania, and eventually in East Germany.

As the Soviets tightened their grip on Eastern Europe, the United States embarked on a policy of containment to prevent the spread of Soviet and communist influence in Western European nations such as France, Italy, and Greece.

During the 1940s, the United States reversed its traditional reluctance to become involved in European affairs. The Truman Doctrine (1947) pledged aid to governments threatened by communist subversion. The Marshall Plan (1947) provided billions of dollars in economic assistance to eliminate the political instability that could open the way for communist takeovers of democratically elected governments.

France, England, and the United States administered sectors of the city of Berlin, deep inside communist East Germany. When the Soviets cut off all road and rail traffic to the city in 1948, the United States and Great Britain responded with a massive airlift that supplied the besieged city for 231 days until the blockade was lifted. In 1949, the United States joined the North Atlantic Treaty Organization (NATO), the first mutual security and military alliance in American history. The establishment of NATO also spurred the Soviet Union to create an alliance with the communist governments of Eastern Europe that was formalized in 1955 by the Warsaw Pact. 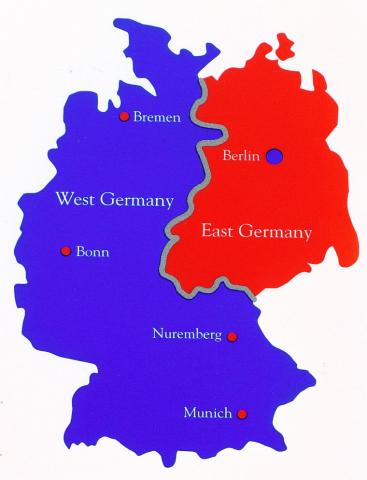 In Europe, the dividing line between East and West remained essentially frozen during the next decades. But conflict spread to Asia, Africa, and Latin America. The struggle to overthrow colonial regimes frequently became entangled in Cold War tensions, and the superpowers competed to influence anti-colonial movements.

In 1949, the communists triumphed in the Chinese civil war, and the world's most populous nation joined the Soviet Union as a Cold War adversary. In 1950, North Korea invaded South Korea, and the United Nations and the United States sent troops and military aid. Communist China intervened to support North Korea, and bloody campaigns stretched on for three years until a truce was signed in 1953.

In 1954, the colonial French regime fell in Vietnam.

The United States supported a military government in South Vietnam and worked to prevent free elections that might have unified the country under the control of communist North Vietnam. In response to the threat, the Southeast Asia Treaty Organization (SEATO) was formed in 1955 to prevent communist expansion, and President Eisenhower sent some 700 military personnel as well as military and economic aid to the government of South Vietnam. The effort was foundering when John F. Kennedy took office.

Closer to home, the Cuban resistance movement led by Fidel Castro deposed the pro-American military dictatorship of Fulgencio Batista in 1959. Castro's Cuba quickly became militarily and economically dependent on the Soviet Union. The United States' main rival in the Cold War had established a foothold just ninety miles off the coast of Florida.

Kennedy and the Cold War

Cold War rhetoric dominated the 1960 presidential campaign. Senator John F. Kennedy and Vice President Richard M. Nixon both pledged to strengthen American military forces and promised a tough stance against the Soviet Union and international communism. Kennedy warned of the Soviet's growing arsenal of intercontinental ballistic missiles and pledged to revitalize American nuclear forces. He also criticized the Eisenhower administration for permitting the establishment of a pro-Soviet government in Cuba.

John F. Kennedy was the first American president born in the 20th century. The Cold War and the nuclear arms race with the Soviet Union were vital international issues throughout his political career. His inaugural address stressed the contest between the free world and the communist world, and he pledged that the American people would "pay any price, bear any burden, meet any hardship, support any friend, oppose any foe to assure the survival and success of liberty."

The Bay of Pigs

Before his inauguration, JFK was briefed on a plan drafted during the Eisenhower administration to train Cuban exiles for an invasion of their homeland. The plan anticipated that support from the Cuban people and perhaps even elements of the Cuban military would lead to the overthrow of Castro and the establishment of a non-communist government friendly to the United States.

Kennedy approved the operation and some 1,400 exiles landed at Cuba's Bay of Pigs on April 17. The entire force was either killed or captured, and Kennedy took full responsibility for the failure of the operation.

In June 1961, Kennedy met with Soviet leader Nikita Khrushchev in Vienna, Austria. (See a memorandum below outlining the main points of conversation between President Kennedy and Khrushchev at their first lunch meeting.) Kennedy was surprised by Khrushchev's combative tone during the summit. At one point, Khrushchev threatened to cut off Allied access to Berlin. The Soviet leader pointed out the Lenin Peace Medals he was wearing, and Kennedy answered, "I hope you keep them." Just two months later, Khrushchev ordered the construction of the Berlin Wall to stop the flood of East Germans into West Germany.

Memorandum relaying the main points of the conversation between John F. Kennedy and Nikita Khrushchev during their first lunch meeting in Vienna, on June 3, 1961.

During this meeting, President Kennedy and Premier Khrushchev discussed Soviet agriculture, Soviet cosmonaut Yuri Gagarin's space flight, the possibility of putting a man on the moon, and their hopes that their two nations would have good relations in the future.

In the summer of 1962, Khrushchev reached a secret agreement with the Cuban government to supply nuclear missiles capable of protecting the island against another US-sponsored invasion. In mid-October, American spy planes photographed the missile sites under construction. Kennedy responded by placing a naval blockade, which he referred to as a "quarantine," around Cuba. He also demanded the removal of the missiles and the destruction of the sites. Recognizing that the crisis could easily escalate into nuclear war, Khrushchev finally agreed to remove the missiles in return for an American pledge not to reinvade Cuba. But the end of Cuban Missile Crisis did little to ease the tensions of the Cold War. The Soviet leader decided to commit whatever resources were required for upgrading the Soviet nuclear strike force. His decision led to a major escalation of the nuclear arms race.

In June 1963, President Kennedy spoke at the American University commencement in Washington, DC. He urged Americans to critically reexamine Cold War stereotypes and myths and called for a strategy of peace that would make the world safe for diversity. In the final months of the Kennedy presidency Cold War tensions seemed to soften as the Limited Nuclear Test Ban Treaty was negotiated and signed. In addition, Washington and Moscow established a direct line of communication known as the "Hotline" to help reduce the possibility of war by miscalculation.

Even as the military commitment in Vietnam grew, JFK told an interviewer, "In the final analysis, it is their war. They are the ones who have to win it or lose it. We can help them, we can give them equipment, we can send our men out there as advisers, but they have to win it—the people of Vietnam against the Communists. . . . But I don't agree with those who say we should withdraw. That would be a great mistake. . . . [The United States] made this effort to defend Europe. Now Europe is quite secure. We also have to participate—we may not like it—in the defense of Asia." In the final weeks of his life, JFK wrestled with the need to decide the future of the United States commitment in Vietnam—and very likely had not made a final decision before his death.